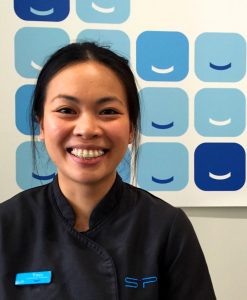 As a child, I remember braces not being the trendy addition they are now. I often heard stories around the schoolyard about how ‘painful’ or ‘big’ they were and so I was slightly apprehensive about finally getting my own set in 2016. However I did, and to be honest, it hasn’t been anywhere near as bad as I expected. I’ve decided to share my experience with others to unravel some of the rumours surrounding my new fancy, but functional, dental bling.

Having been with the team at Sable and Pepicelli Orthodontists for several years now, I have collected a wealth of handy tips and forewarnings about the initial experience. However, a lot of these were not necessarily gained from my colleagues as you’d expect, but rather from the many patients I see as I accompany them through their orthodontic journey.

It has been four weeks since I had my braces placed and so far, I’ve found them to be a lot easier than I had imagined. The feeling of having little things stuck to all of my teeth has proved to be more of a challenge than the suggested ‘pain’ associated with them (I found it to be more of a low-level background ache or tenderness that lasted a couple of days). Initially my lips and cheeks did get caught on them (which caused a few ulcers) and I found I needed to be a lot more rigorous with my cleaning routine to get out all the little bits stuck between the brackets. After roughly two weeks, they just felt like any other part of my mouth.

There were a few unexpected challenges too. It turns out we really are right when we stay ‘stick to soft foods for the first few days’ (although this may have been exacerbated by the visit to Mr. Nastri’s rooms to have four premolars extracted). All I can say is thank goodness for EasyMac and pumpkin soup! The other surprise was the increased saliva flow from something foreign being in my mouth – it felt like I was dribbling constantly! Although the saving grace is that with all the extra saliva, the braces felt smoother to my lips and cheeks!

Granted I’ve only had my braces on a few short weeks, but it’s been incredible to see how quickly my teeth have moved and the difference it has made – already the spaces where my teeth were taken out seem to be closing and I’ve really embraced them!

Why do I have to wear my retainer for so long?

What foods should I avoid with braces?

Why is oral hygiene so important with braces?

How do I take care of my retainers?

Recipe of the day